Spend Fall at The Hermitage

Visit President Andrew Jackson’s Hermitage: Home of the people’s president this fall. The Hermitage is one of the largest, most well-preserved and most visited presidential homes in the United States. Opened to the public in 1889, it is one of America’s first presidential museums. Today, The Hermitage is a 1,120-acre national historic landmark with more than twenty historic buildings, including Jackson’s mansion and tomb, restored slave cabins, a church and gardens. In recent years, new interpretive initiatives and educational programs such as the history of slavery have enhanced the experience of more than 230,000 annual visitors.

Anytime throughout the year you can walk through Andrew Jackson’s life and home, explore a beautiful, historic Tennessee farm and experience an important piece of Nashville and our nation. Costumed tour guides usher guests through the mansion, regaling with the stories, history and lore of each of the rooms.

A beautiful season everywhere in middle Tennessee; experience fall at The Hermitage with some of these fun and interesting events:

After dark this fall, explore the haunted side of history on a Hermitage Ghost Tour as you voyage through the mansion, grounds and cemetery by lantern light. Along the way, guides present stories of strange encounters such as the ghosts of the Battle of New Orleans and Jackson’s infamous meeting with Tennessee’s Bell Witch. Ghost Tours run Wednesdays through Saturdays from September 18th to November 9th at either 7pm or 9pm. Tickets are $35 each.

Fall Fest is a spectacular weekend of art, music and history featuring more than fifty local artisans from across the southeast. The festival, which is free to the public, takes place at The Hermitage on Saturday, October 5th from 10am until 5pm and Sunday, October 6th from 10am until 4pm. All proceeds from the festival benefit the Andrew Jackson Foundation.

YOGA AT THE HERMITAGE

Join The Hermitage for a transformative eight weeks of yoga at this historic site. Small World Yoga will offer Tuesday evening sessions at surprise locations across The Hermitage grounds from September 3rd through October 22nd and yogis of all levels are invited to join. Classes take place from 5:30pm – 6:30pm and are $10 each or may be purchased as a package.

Your Obedient Servant: James Monroe’s 1819 Presidential Tour of the Southern States: The traveling banner exhibit, organized by Virginia’s James Monroe Museum, commemorates the bicentennial of President Monroe’s southern tour while highlighting his visits to various states including Tennessee. The exhibit will be on display from September 5th through October 4th and is included with the price of admission

CONVERSATION WITH THE CLASSICS

Step away from the screens and join us by the fireside for three special evenings in the 19th-century literary world, featuring the work and lives of Charles Dickens, Edgar Allan Poe and Washington Irving. Tickets can be purchased individually for each evening program,

or you can save $15 when you purchase a series ticket. Tickets to “Brunch with Edgar Allen Poe” sold separately.

Pack up your pup and enjoy the trails of Andrew Jackson’s Hermitage every last Saturday of the month! Remaining dates include September

28th, October 26th and November 30th. On Dog Days, visitors can purchase an $8 grounds pass (members get in FREE!) to walk the grounds, hike the trails and enjoy the preserved natural surroundings and historic 19th-century buildings. For a $15 combo ticket ($7 for members), guests receive access to an exclusive Hounds Hike the Hermitage tour.

The annual event, hosted by the Andrew Jackson Foundation, will take place on Friday, October 18th at the Omni Nashville Hotel. Acclaimed journalist and historian Rick Atkinson will deliver this year’s keynote address. The gala is co-chaired by Kim Holbrook and Robin Puryear, who previously worked together on the Antiques and Garden Show of Nashville. Atkinson is a three-time Pulitzer Prize- winner and New York Times bestselling author of seven narrative histories spanning five American wars. Other accolades include the George Polk Award for national reporting, the John Hancock award for excellence in business writing and the Society for Military History Distinguished Book Award. Funds raised at the gala support education and public programming surrounding our nation’s seventh president and the Jacksonian Era, as well as Hermitage preservation and restoration projects. Tickets start at $350 for an individual guest and are now available online at thehermitage.com/gala.

Andrew Jackson’s Hermitage is located at 4580 Rachel’s Lane in Nashville. Email info@thehermitage.com or contact the call center at 615.889.2941. For more information, visit thehermitage.com.

Up The Road - Pearl's Fine Dining 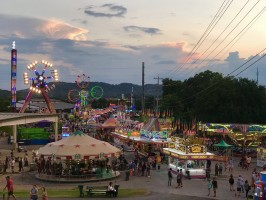