Congratulations to Brentwood as it turns fifty this year! Brentwood has, of course, been around a little longer than that. Brentwood historian Vance Little traced the origins of settlement back to the early 1800s when land grants were handed out shortly after the end of the Revolutionary War.

By the time the city was incorporated on April 15th, 1969, Brentwood had achieved an official population of 3,378 people. Since then, it’s been a story of growth and development, infrastructure, government and business and the city now has a booming population of over 40,000 people.

Why 1969? Fifty years ago, I-65 opened, connecting Brentwood and Franklin to Nashville. Mike Huff, one-time owner of Huff’s Grocery in Brentwood and now a local history buff, was a young man when the interstate opened. “It changed the whole dynamic of Brentwood,” he recalls. “It cut off Wilson Pike and Old Smyrna Road and then slowly it brought great change to the area.”

Before 1969, Brentwood was a small, rural diversion between Nashville and Franklin. There was Huff’s Food Town (where the Snooty Fox is now on Wilson Pike Circle), a family restaurant, Noble’s, a post office and a handful of stores. And Maryland Farms was, well, farms. It was a different world before 1969, says Huff. “Our lives as kids revolved around Boy Scouts and baseball. We didn’t have any football in Brentwood then. We’d ride on the hood of cars and nobody cared.”

Everyone knew everyone in Brentwood in the ‘60s and Mike Huff, through working in his family store, was good friends with a host of country music stars of the day. “They’d come down from Nashville to buy their meat at our store. Minnie Pearl, Marty Robbins, Eddy Arnold, Ronnie Millsap, Skeeter Davis and loads more I don’t recall. It was a very friendly place to grow up.”

Fifty years on and while Brentwood has grown and prospered, it remains a vibrant and friendly, community-based city. To mark the anniversary, the city is planning a series of family-friendly events to celebrate and remind everyone of how far Brentwood has come. Join the festivities at the parade on April 13th in Maryland Farms, a community festival on June 15th at Crockett Park and a very special birthday party on October 10th at Ravenswood Mansion.

Here’s to the next fifty years! 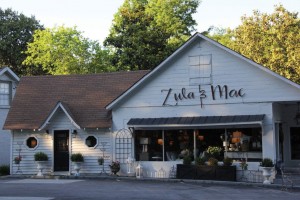 Meet the Marketing and Communications Director of Williamson, INC.